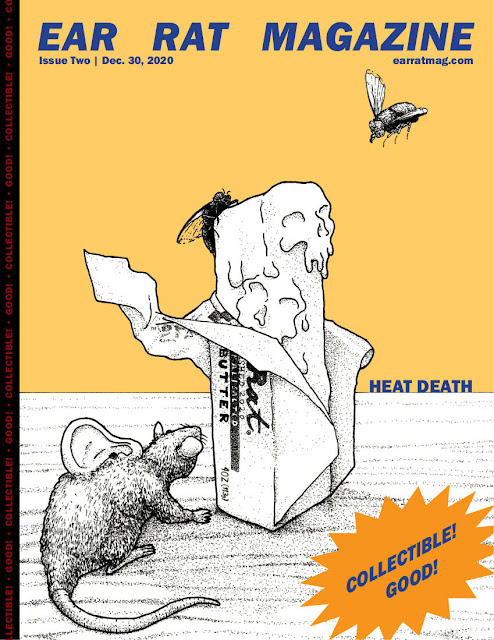 Click above to view/download.   At a time when literally no one asked for it, Ear Rat Magazine returns for a second issue. With more artwork than ever and a new Art Director at the helm, this is our best looking issue ever! We've got more single panel comics and artwork than you'll know what to do with. Print them out and cover your walls in them, laying on more and more layers, your walls thick and heavy with wallpaper paste. Do it. You know you want to. Oh, what's that? You wanted words, not pictures and doodles and such? No prob, I got you covered, man. We're going to look back on days of yore, time travel in an otherwise impractical car, listen to some kind of mad scientist ramble on about stuff, contemplate everything in existence, and feel totally out of our comfort zone as we try to interpret the meaning of a poem without getting it wrong. Ear Rat Two, babes. Let's do this.
Post a Comment
Read more

Words by Mike V. Art by Harr B.   Henry checked his watch as he waited in the break room. The Keurig machine whined and moaned as it injected hot water through a tiny, unrecyclable pod of plastic and shit coffee. The machine barfed into the waiting vessel below; a promotional mug for "Protoxamil B" the new product Henry's company launched recently. Henry's watch was five minutes fast, but it didn't change how late it was to be in the office: 7:27 PM. The Keurig finally quieted, Henry grabbed his mug and started power-walking down through the hallways to his desk. Every cubicle on the way was empty. Even George from accounting, who had an alternate work arrangement where he could come in later than usual for the next few months as long as he stayed later as well, had left already. Henry's eyes scanned through the cubicles as he passed, his coffee sloshed back and forth in his mug but never tipped over the edge.   As Henry rounded the corner to the hallway where
Post a Comment
Read more 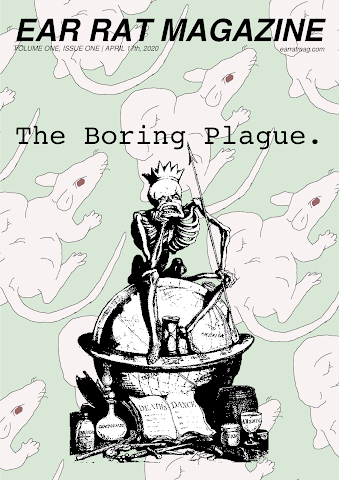 EAR RAT MAGAZINE VOLUME ONE ISSUE ONE Click above to view or download PDF. "What the fuck is an ear rat, anyway?" Issue one Features: - "COVID-19: Week by Week" by Dannarchy - "What's Next" by bikerbuddy (of Reading Project fame.) - "American Prepping and Agency" by incessantpain - "Tiger Balm" by Pike Malarkey - also other things are in the zine.
1 comment
Read more